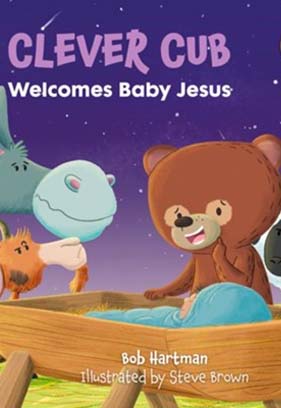 Clever Cub may be a shy little bear cub, but he’s bright and clever enough to listen to his mom’s stories. And when he does, he not only imagines himself in those tales but he learns a lot about God and His love along the way, too.

Clever Cub is a good little bear cub. And like good little human cubs, he loves to look at the star-filled skies, eat berries, sniff flowers and break out in joyful song for no particular reason. Oh, and he can even find himself a tiny bit frightened on those dark and stormy nights that come along every once and a while.

Fortunately for Clever Cub, he’s got a loving mama who’s more than happy to help him enjoy those berry-eating-sing-out-your-heart good times, as well as offer a furry, comforting hug in the not-so-good moments. And she’s also wise enough to share some very good stories, too.

Those stories can whisk Clever Cub off to the birth of the baby Jesus (told from an animal perspective, of course); help him amble into God’s beautiful creation; and prompt him to think about the many reasons why he should be very, very thankful.

Mama Bear’s sweet stories always make her little cub imagine and wonder. And Clever Cub is clever enough to pick up some wonderful insights about God’s love for him, too.

The first book in this series, Clever Cub Welcome Baby Jesus, tells the story of God’s angels visiting the shepherds at night. Clever Cub imaginatively joins them, and other animals, as they worship a newborn baby in a manger. When imagining all the animals around baby in the manger Clever Cub notes, “I think it would be MOO-y and BAA-y. Oh, and WAA-y when baby Jesus woke up! And maybe a little stinky too.” “I imagine it would have been amazing!” Mama Bear says. “To be there when God’s own son was born.”

In Clever Cub Gives Thanks to God, Mama Bear and Clever Cub enjoy the blessings of nature, and Mama recounts the story of man healed by God as an illustration of how to express our thanks. “He went WALKING and JUMPING and PRAISING God—all around the temple courts!” Mama Bear says at the end of her tale. “And that’s how he showed he was thankful?” Clever Cub asks. “Exactly,” nods Mama Bear.

Clever Cub Sings to God is pretty much exactly that. Clever Cub wanders around, greeting other animals and belting out a tune about the wonders of the world around him and his gratefulness for God’s hand in it.

Finally, in Clever Cub Explores God’s Creation, Mama Bear helps Clever Cub make it through the scariness of a rainy, stormy night by telling him about the wonders of God’s creation. And that includes his creation of man and woman. “And God made people to be a bit like Him too,” Mama Bear said. “God made people who could love others and make things and talk to Him. And God told the people, ‘I want you to take care of the world for me.’”

Mama Bear is as wise and caring as you might hope a Mama Bear to be.

Each of the Clever Cub books have a few discussion questions of their own tacked at the end of the stories, such as: What would you say to baby Jesus? What are you thankful for today? What amazing things do you see today?

The Clever Cub picture books are very colorful and filled with animals and nature scenes that will grab a young child’s eye. And they are sweet stories of family love that point children toward recognizing and enjoying God’s creation.