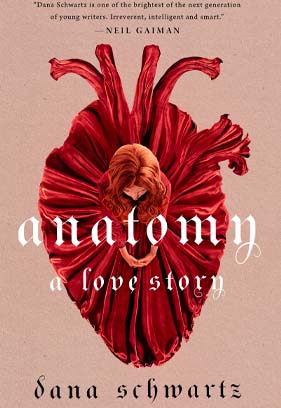 Set in 19th-century Scotland, Anatomy tells the story of a headstrong young girl set on becoming a surgeon, even if it means practicing on the bodies of the recently buried. She meets a handsome body snatcher—or resurrection man—who knows just where to, uh, dig up such things. But together they uncover far more than they bargain on.

The year 1817 is a modern day filled with incredible discoveries in the fields of science and medicine. But to some, it still feels like a rather backward age.

Lady Hazel Sinnett is one such person.

To be fair, 17-year-old Hazel is something of an anomaly: a young woman of privilege who’s much more impassioned about the possibility of becoming a surgeon than she is about marriage.

It’s not because she has no prospects. The fact is, Hazel is very presentable, and she and her cousin, Bernard—the future Viscount Almont—have been unofficially engaged since they were children.

The idea of healing the human body, however, has always consumed Hazel’s attention far more than things of love. She studies medical textbooks with a fever for understanding. She conducts small exploratory experiments on animal corpses that she finds on her walks. She’s even taken up the task of stitching up small wounds among the household staff.

Her family might not altogether approve, but no matter: Since her older brother died from the Roman Fever, her mother has been overprotective of Hazel’s younger brother, Percy, now heir to their family’s estate. And that’s left Hazel to pursue her medical passions unnoticed, if not altogether unseen.

Of course, it’s still 1817, and Hazel is a woman, and a noblewoman to boot. Her desires for medical appointment are thought ridiculous. Still, she persists: She even dressed up in her deceased brother’s clothes and enrolled in classes at one point. And was at the top of her class, no less. But upon being discovered, she was asked unceremoniously to leave.

The only slim chance Hazel has to become a surgeon is to take the annual Physicians Examination—a rigorous and thorough test that weeds out more than 60% of the bespectacled and black-coated men who dare to try it. She’d needs to take it and pass. But without hands-on surgical practice in a classroom, that would be impossible.

When Hazel first met this young man, he seemed to be but one of the unwashed masses in the streets of Edinburgh. But there was something different about him. (Something quite attractive, too, if Hazel was ever so bold to think it.)  He even helped sneak her into a public display of surgery staged by the esteemed Dr. Beecham.

It was only later that Hazel learned that this Jack Currer was a “Resurrection Man,” a desperate sort who steals the freshly buried bodies of the dead to sell to the Anatomists’ Society. But the fact is, the anatomists use those bodies to teach physicians in training: the very thing Hazel wishes to be.

And Jack is more than willing to accommodate.

What Hazel and Jack don’t know, however, is that their soon-to-be secret arrangement will do more than just tug and pull at the proprieties and expectations of the world around them. Their actions will unwittingly uncover secrets that lay open the beating and bloody heart of Edinburgh society itself.

Hazel finds a dead frog and counts it as a “gift from God” that she can use in an experiment. Later, Jack marvels that, in spite of a plague-like disease spreading through Edinburgh and the fact that he is always around dead bodies, he never gets sick. He wonders if it is “God giving him a mercy.” While on horseback for the first time, Jack prays to survive: “More praying in the last 40 seconds than he had in his entire life.”

When a doctor is confronted by the horrible atrocities he’s inflicted on defenseless poor people in the name of science, he rationalizes his choices away, saying: “Do you believe God mourns insects that are crushed beneath stones while man is building towers?”

We hear intimations that, to the uninitiated, science and advanced medicine techniques can appear to be “sorcery.” And later in the story, one doctor’s life-elongating and severed limb-enlivening serum does appear almost magical in how it makes its users nearly immortal. Someone uses the serum to survive several lifetimes, and another uses it to survive a public hanging.

Hazel’s mother seems, at times, unconcerned about her daughter—instead fawning over her young son, Percy. Mother later explains that Percy is now the heir apparent, and his wellbeing is directly linked to her own security (since women have no value in society and can’t hold their own wealth).

Hazel’s mother does, however, push Hazel to think straight and get a formal proposal from her wealthy cousin, Bernard. “The world is not kind to women, Hazel,” Mother tells her.  “Even women like you. Your grandfather was a viscount, yes, but I was a daughter and so that means very little. Your father owns Hawthornden, and when he—when your father dies—Hawthornden will go to Percy. Do you know what happens to unmarried women? … Nowhere to live. At the mercy of your relatives. At the mercy of your little brother and whomever he deigns to marry. Begging your sister-in-law for scraps of human decency, praying that she’s kind.”

Hazel’s father, a Captain in the Royal Navy, is never seen.

The one other parental-like figure in Hazel’s life is Dr. Beecham, a respected doctor whom she meets and comes to look up to. However, Beecham turns out to be a rather heartless man who has been jaded by his position, work, and longevity.

Hazel herself becomes an example-worthy individual who starts out with limited experience but eventually grows in wherewithal and skill to the point of giving aid to many people in need. Those individuals look up to her and take steps to aid her whenever they’re able.

We see doctors use a chloroform-like liquid called “ethereum” to knock patients out before surgery. Someone is rendered unconscious with the substance so that others can escape. A different serum is used to animate dead tissue and elongate life.

On the violence front, Anatomy gets pretty gory at times. We hear of a disease called Roman Fever, named for the telltale symptomatic sores that resemble “several stab wounds to the back like Julius Caesar’s.” Its first spread reportedly killed 2,000 people, and we’re introduced to several people with messy examples of the disease. A dead frog and a decapitated head are both enlivened by an electrical charge. Doctors pull out teeth, lop off diseased limbs and cut open bodies to examine the fully described inner organs. Large men grab and manhandle innocents for profit.

Hazel works with several exhumed bodies, cutting into them and removing organs. She delivers a baby from a woman in severe pain and deals with people suffering from a terminal disease. People are hung by the neck, stabbed with quills, slashed open with knives and scalpels and a boy has his eye gouged out. The eye is then sutured into another man’s head while the boy bleeds out. Hazel stiches up a woman’s cut-open palm. She also dissects a rabbit and lays out the animal’s organs.

We read that “stealing a body was against the law, but if they actually took any property from the grave, that would make it a felony.” So, Jack and other resurrection men would strip the stolen bodies of their clothing before loading them into a wheelbarrow and taking them away. One young resurrection man admits that in his case, it was the first time he’d ever seen a naked woman.

Hazel is kissed by her fiancé Bernard. But it’s when she kisses Jack that sparks fly. There are several sequences when the two kiss passionately.

However, readers should note that this yarn doesn’t flinch or take pause when it comes to bloody and, at times, gruesome things. And its view of life and death does not adhere to any Judeo-Christian standard.