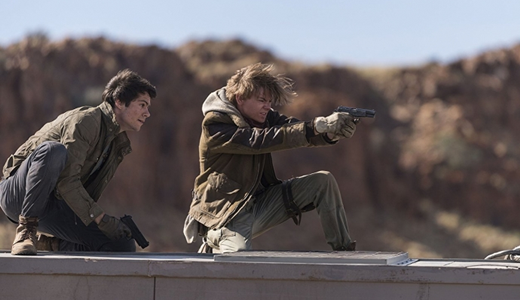 There’s a little spring in the teen dystopian movie yet.

Maze Runner: The Death Cure, the third chapter in the Maze Runner series, galloped to an estimated $23.5 million and a box-office victory, foiling a potential four-peat by the Hollywood thoroughbred Jumanji: Welcome to the Jungle. Granted, The Death Cure looked a little sickish en route to the weekend win: Its take was about $7 million less than its predecessor, Maze Runner: The Scorch Trials took in back in 2015, and $9 million off the first film’s opening weekend performance. But a win is a win, and given that star Dylan O’Brien was seriously injured during the movie’s making, perhaps the folks behind the Maze Runner series are just happy to have the flick out at all.

Mourn not for Jumanji, though. Though Sony’s disappointingly salacious blockbuster slipped to second place this weekend with $16.4 million, it’s now raked up a stunning $338.1 million in North America over the last six weeks, and it’s finished every single one of those weeks either No. 1 or No. 2, making it arguably the Tom Brady of moviedom. And, like Brady, it’s positively ancient for a movie, too.

The makers of Hostiles, a well-received Western starring Christian Bale, were likely disappointed their film didn’t snag any Oscar nominations last week. But they took solace  with a $10.2-million weekend after the flick expanded into more than 2,800 theaters. The Greatest Showman continues to show great durability, moving from fifth to fourth and collecting another $9.5 million. Meanwhile, Oscar hopeful The Post nestled into fifth with about $8.9 million.

A few other Oscar contenders expanded into additional theaters this weekend in hopes of adding a little cash to their awards luster. The Shape of Water, which scored 13 Oscar noms, added 1,001 theaters to its run and earned $5.7 million this weekend, moving from 16th place to eighth. Three Billboards Outside Ebbing, Missouri, climbed from 17th to 13th place, collecting another $3.6 million en route. And I, Tonya added another $3 million to its bottom line after adding a handful of new screens to its run.