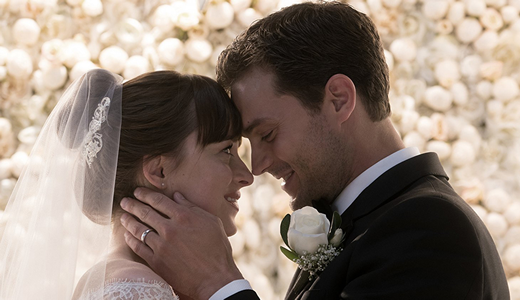 A tawdry tale of sex and marriage threw some shade at the rest of the box office this week. Or did it throw a full 50 shades, hmmm?

Not sure, actually. And technically, I’m only guessing that Fifty Shades Free is a “tawdry tale of sex and marriage,” given that Plugged In opted not to review the film. If I was really curious about the film, I could ask one of the millions of people who apparently plunked down a collective (and estimated) $38.8 million on the movie, which was more than enough to coast to a box-office win against a bevy of newcomers. But, frankly, I’m not that curious, so we might as well move on.

Peter Rabbit—about as different a film as one can be from Fifty Shades (again, just  guessing)—finished second, clearing $25 million from weekend crowds. That’s quite a bit of lettuce.

In third place comes yet another box-office newcomer, Clint Eastwood’s The 15:17 to Paris. The film is based on a real terrorist attack and stars, interestingly enough, the incident’s real-life heroes. But that clever conceit wasn’t enough to entice many people to the theaters to see it: It banked a rather underwhelming $12.6 million.

That trio of newcomers was enough to knock Jumanji: Welcome to the Jungle all the way down to fourth place—the first time in eight weeks Jumanji hasn’t finished No. 1 or 2. Still, the $9.8 million the film earned this weekend pushes its total North American gross to $365.7 million, and its worldwide take now stands at a whopping $881.8 million.

Speaking of long-in-the-tooth box-office stalwarts, Hugh Jackman’s The Greatest Showman continues to boast a great showing. It finished fifth with $6.4 million, bringing its domestic tally to $146.5 million. That makes it Jackman’s highest-performing film in which he’s not a super-strong wealthy benefactor (Les Miserables) or a grouchy superhero (the X-Men movies) or an, um, emperor penguin (Happy Feet). While next week’s Black Panther debut may finally push The Greatest Showman out of the top five, the circus isn’t leaving town just yet.