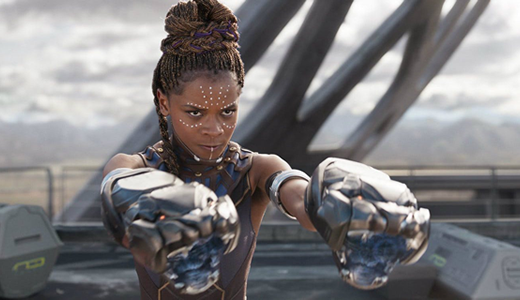 The reclusive African nation of Wakanda may have weapons that make ours look like stone spears, but it says it has no interest in fighting anyone.

‘Course, judging from the box-office standings, there’s more than one way to conquer the world.

Black Panther, Disney/Marvel’s latest superhero flick, crushed the box-office derby for the second straight week, thundering to an estimated $108 million in North America. While $100 million opening weekends are kinda common these days, Black Panther is only the fourth film in the history of moviedom to make more than $100 million in its second week. It also reached the $400 million mark faster than any other film except for (of all things) Jurassic World. It’s already fifth among the 18 movies that make up the Marvel Cinematic Universe, and it’ll almost certainly be third by the time we meet next Monday: It’s just $8 million behind Captain America: Civil War and $9 million behind Iron Man 3. Even Avengers: Age of Ultron’s $459 million is in Black Panther’s sights. Yep, the lion might sleep tonight, but the Panther is wide awake.

And Black Panther’s doing just about as well overseas, too, pocketing about $304 million in 55 countries.

The weekend’s trio of cinematic newcomers really didn’t have much of a prayer to topple Marvel’s ferocious feline, but they still made some smaller waves.

Game Night was the best of the newbies, sliding into second with an estimated $16.6 million. Annihilation, Natalie Portman’s freaky new sci-fi flick, settled into fourth with $11 million—just a few carrots behind the durable Peter Rabbit ($12.5 million for third).

Every Day, the weekend’s third wide-release film, finished well outside the top five. The body-swapping teen romance collected just $3.1 million for ninth, about $300,000 behind the uber-durable The Greatest Showman.

And while we’re on the subject of Showman, an appreciation: Hugh Jackman’s toe-tapping musical has now made an astounding $160.8 million during its 10 weeks on the charts. “Why, that’s less than Black Panther earned in its first weekend!” You might say, and you’d be right. But let’s face it: Star Wars and Marvel movies always blow the curve, and Showman’s week-in, week-out performance has flabbergasted prognosticators. Its endurance reminds us of an age when movies could still draw crowds for several months. (We could say the same thing about Jumanji: Welcome to the Jungle, by the way, which finished sixth with $5.7 million.) And ccording to Box Office Mojo, Showman’s now the fourth biggest musical of all time.

Speaking of which, will Black Panther dance to another win next week? It’ll have to contend with another flick named after a color and an animal—Red Sparrow—to do it.