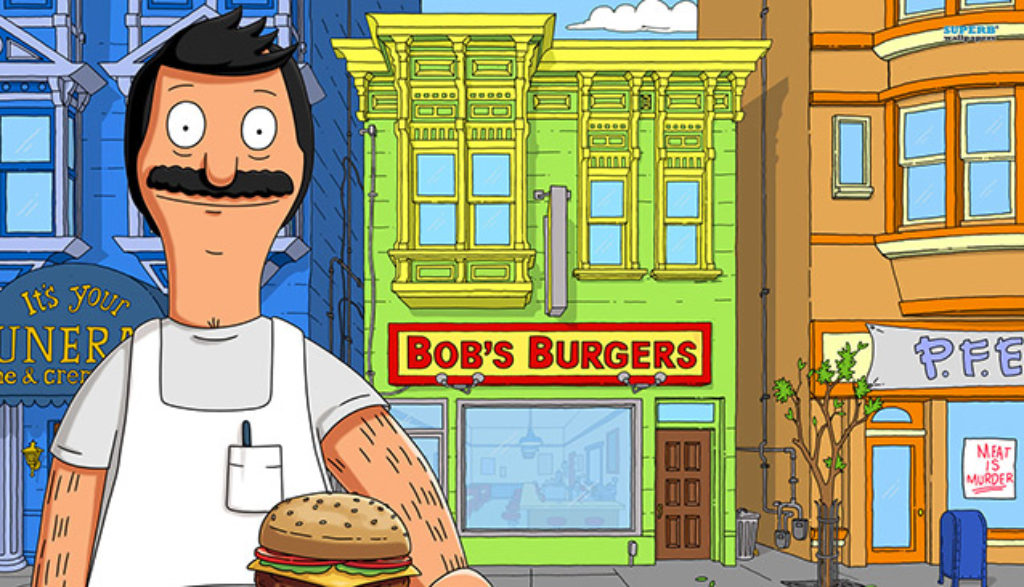 Take Bob Belcher, proprietor of the greasy little spoon known as Bob’s Burgers. His fry cook scratches herself in unfortunate places. His marketing whiz thinks savvy advertising is a bullhorn that makes disgusting noises. His counter help spreads rumors that Bob’s using “beef” from the crematorium next door.
“I’d fire all of you if I could,” Bob says.

But because they’re his children—and because they presumably work cheap—Bob and his meat-grinding wife, Linda, make do. I mean, you get what you pay for, right?

In the case of Bob’s Burgers, which (thanks to Fox) is piped into your television free of charge each and every week, that’s ever so true. Network execs consider this to be savory dinnertime entertainment. But that’s only because Fox defines a “family show” only by whether it has a family in it, not by whether families should watch it. And this cartoon’s take on the modern nuclear family is questionable—lean on lessons, loaded with questionable additives and may give you indigestion.

It’s not completely without merit. Bob, our longsuffering restaurateur, digs his family in a mumbling, exasperated sort of way. Linda is devoted to her hubby in spite of his many faults, and she encourages him to pursue his short-order dreams no matter how many times he gets splashed with metaphorical fry oil. The Belcher children, for all their oddities, show flashes of near humanity. And episodes often conclude with a touchy-feely moment. In fact, as Bob’s actual burgers have grown ever-more questionable, the tone of the show has gotten, dare we say, sweeter?

But while it sometimes aims for the heart, its gags hit somewhere south of there. In other words, cleanly funny moments are as rare as tofu on Bob’s lunch menu, never mind that the series is a two-time Emmy winner for Outstanding Animated Program (in 2014 and 2017). And while it’s less objectionable than any one of Seth MacFarlane’s slew of comedies (see: Family Guy), episodes are still filled with quips that give noxious nods to cannibalism, talking feces, bestiality and pedophilia, among other things.

Bob once asked Gene, his son, if he could please stop using his bullhorn to make farting noises at folks passing by the diner.

“There’s a line between entertaining and annoying,” Bob tells him.

“No!” Gene hollers. “That’s a myth!
”
Which neatly sums up the philosophy, it would seem, of Bob’s Burgers.

Bob’s daughter, Tina, is a member of a Girl Scout-like group called the Thundergirls. And it’s time for that group’s annual father-daughter cardboard boat race. But Tina wishes that her dad—given his questionable taping skills—would just sit this event with her Girl Scout-like group out. Meanwhile, Linda insists on dragging kids Gene and Louise to the local fire department’s open house—an outing the kids used to love but have long since outgrown.

Tina’s relationship with her dad turns out to be pretty touching, if fraught with tension. Tina pushes Bob aside to build the boat herself. But then she overhears Bob lament to his wife, Linda, “Maybe my kids don’t need me anymore.” Tina feels bad and fakes a taping accident, allowing Bob to tape the boat. But she does so against her own better judgment, and she lashes out again when the boat falls apart, yelling at her pops in front of everyone. Still, Tina eventually apologizes, and the two unite to stop a troop of nefarious cheaters.

One of the Thundergirls professes that she and her friends are all “angels” now, even as she begins to give Tina a crude hand gesture. The completed gesture is off camera, but Tina quips, “Yeah, angels usually give the middle finger.” These girls are also a big bunch of cheaters—one of whom speculates whether they should kill Tina after she discovers their plot—who bully their own leader and are pretty insensitive to their own neglected fathers.

A Thundergirls official—who confesses her nickname is “Oversharin’ Karen”—frets about her underwear being visible as she climbs a tree, complains of chapped nipples (we later see two grease stains on her shirt where she apparently put some lip balm) and pops a handful of pellets into her mouth, hoping they’re raisins. “Nope, they’re not raisins!” she later says.

Jokes are mined from bad breath and “boogers,” and we hear some folks talk about firemen posing for calendars. (There’s no direct inference in the show, but most charity calendars featuring firemen depict their models shirtless.) When Linda takes her children to the firehouse under false pretenses, Louise accuses her mother of teaching them to lie. Young Gene (and others) express admiration for Amazon’s risqué comedy The Marvelous Mrs. Maisel. Tina tells her dad that their boat is a “piece of poop”. Characters say “d–n” five times, “crap” three times and misuse God’s name a half-dozen times.

Linda and her kids (Tina, Gene and Louise) try to save a turkey that’s on its way to the slaughterhouse. Bob is forced to join his family instead of preparing for their Thankgiving dinner.

As the family try and save an innocent turkey from death, they hear multiple violent descriptions about killing animals. A pack of coyotes try and kill a turkey. A reporter looks for stories about murder and robbery.

A child mentions that it’s okay for someone to marry a turkey. There’s a close up of a man’s covered rear, and the same man is told to take his shirt off to scare animals. A few references to sex are heard and a dad is called “hot.” Toilet humor is used quite often.

People make jokes about incompetent parents, grandparents and political figures. Bob’s children pinch his nipples (and those of other male adults) and frequntly interrupt adults. Two older men make comments about others being heartless and terrible.

The kids use a handful of profanities, including misusing God’s name eight times. The words “a–,” and “crap” are heard three times. “H—,” “d—” and “d–mit” are all heard once.
Someone drinks something that “is not coffee” out of a mug (we assume it’s some sort of liquor) and a sign reads “beer.” The episode includes some toilet humor, including a scene where a boy expresses his fear that the drain will “eat” his penis. (We hear another mention of that particular organ, as well.) One character reveals cleavage, a man lifts his legs and is “inspected” by another man. Someone is called a “sex-retary” and there are jokes about death. Someone gets slapped on the rear. We hear talk about “puberty strength” and hairy bodies. People destroy school property, cheat, lie and joke about cocaine.

“Father of the Bob”

It’s holiday time, and Bob’s whole family moseys over to his father’s diner for Bob Sr.’s annual Christmas party. Bob, who never felt appreciated by his pops, puts a 15-minute limit on the visit. (“It’s like speed dating with your dad!” Gene says.) But those plans quickly go awry, of course.

Bob and Bob Sr. showcase some truly dysfunctional family dynamics, but Bob eventually apologizes while the two line dance … in a gay bar. While scouring Bob Sr.’s basement for a present for his dad, Gene strips to his underwear and lounges in a box full of baked beans. He contemplates giving the “bean bath” to his dad as a gift (after adding a “little bit of pee”), but when the box breaks, he spends the rest of the episode running around in his underwear soaked in bean sauce.

There’s a wink at incest. Children pray to “Lord Santa,” and when Bob says that Santa’s not to be prayed to, Gene hollers, “Lord Santa, strike him down!” A patron can’t decide whether to attend Christmas Eve services or play basketball. A sign in Bob’s Burgers advertises a special: “Cheeses Is Born Burger.” (And God’s name is abused as well.) Linda believes “Christmas magic” may be contained in all manner of alcoholic beverages. Bob says “Merry Freakin’ Christmas,” and we also hear “b–ch” (three times) and “d–n” (once).

A documentary filmmaker shows up at Bob’s Burgers with a cow (actually a steer wearing a wig) named “Moo-lissa,” demanding Bob either send it off to be slaughtered or apologize for his cattle-killing profession. Louise seizes the opportunity to create emoticons from the animal’s feces, tricking Tina into believing the steer is communicating with her—”like Gram-Gram used to do.”

Moo-lissa, the cross-dressing steer, inspires a raft of bestiality-inflected jokes, from Gene’s insistence that the animal’s only a “4,” to Bob’s bizarre dream in which he ends up French kissing the animal. The filmmaker is unfamiliar with the anatomy of cattle, insisting that he “milked” it. When the animal urinates on Bob’s rug, Gene is inspired to drop his drawers (we see his animated backside) and follow suit.

We hear about Tina’s bra, how Louise’s gun license has been approved, a joke about how marriage emasculates men, and lots of talk about “murder” in the context of beef. We see cattle carcasses, cuts of meat and a bloody scythe whish through the air. Characters misuse God’s name frequently, along with “a‑‑,” d‑‑n” and euphemisms for the f-word.

Bob celebrates his restaurant’s grand re-re-re-opening, but finds that business has slowed ever since Louise told her classmates that the burgers come from human meat. To make matters worse, a health inspector shows up and turns out to be Linda’s ex-fiancé.

Tina perpetually talks about her crotch itching. Characters blurt out sexually charged double entendres, and Gene makes flatulence noises with his bullhorn. Louise introduces a burger she calls the “Child Molester” (it comes with candy), and the family discusses which child would be more likely to be molested. Gene ends up feeling left out because his father thinks he’s safe from predators—perhaps because he’s overweight. Louise cheers him up by squeezing his cheeks and saying, “Who wouldn’t want to molest this face?”

Linda and Bob share a sloppy kiss. (Saliva drips from their mouths, and later Louise calls them a “couple of sluts.”) Gene asks Linda if the health inspector is “going to be our new dad.” Linda looks for an anniversary present in an occupied coffin. In a moment of despair, Bob tells himself that he and his entire family are failures. God’s name is abused nearly a dozen times.