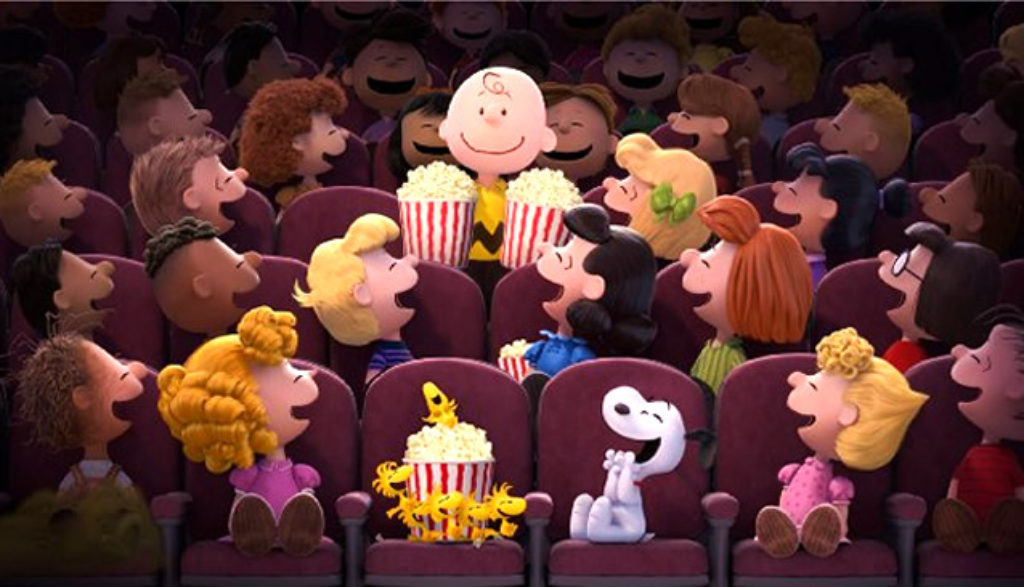 Where other kids run and skip, he slips and plants his face in the dirt. When others swing for the fences, Charlie connects with nothing but breeze. Why, even Charlie’s dog, Snoopy, out-cools the boy by a country mile. But good ol’ Charlie Brown is no quitter, that’s for sure. He keeps running. He keeps swinging. And he keeps loving his faithful mutt pal.

So that’s why Charlie has high hopes the new kid moving in across the street might end up looking at him in a different light. I mean, he’ll never have seen all his goof-ups or heard of all the many things he’s done wrong. He’ll not know that his every kite-flying attempt has ended up in the woody jaws of that tree down the street. He’ll just see him as another kid. Hey, he might even think he’s kinda nice!

And that’s about the time Charlie catches his first glimpse of his new neighbor. Good Grief! She’s the most delightfully pretty and perfectly brilliant little red-haired girl you could ever imagine. Or at least Charlie imagines she is anyway.

You see, as the days go by, Charlie’s so flustered by her overwhelming appeal that he never actually looks her in the eye or speaks with her. He just sits in the back of the classroom or near the fence on the playground, gazing at her lovely auburn locks and dreaming of being brave enough to someday see her face and say “Hi.”

“She’s something and I’m nothing,” he tells that local know-it-all, Lucy, while asking her for advice on talking to girls. And for a nickel she lays the facts on him. “This is the face of failure,” Lucy says while pointing a mirror in his direction. “You’ve got to show her you’re a winner.”

Now, that brutal assessment might leave another kid feeling ill and misused, bullied even. But not Charlie Brown. He may be completely useless when it comes to kites, sports, school, board games, roller-skating, talking to girls … and, well, pretty much everything. But he’s not a quitter. If there’s something he can win at, he’ll find it.

And then maybe a certain red-haired someone will take notice of a bobbleheaded kid next door in a zigzag shirt. (Sigh.)

Charlie Brown’s stick-to-itiveness and integrity are two huge plusses here. He may stumble and bumble and be labeled a “blockhead,” but he never gives up and he always makes the right moral choice. Even with an almost impossible book report assignment on his plate, Charlie pushes himself to finish what he starts. He tells the truth and refuses to take credit for a perfect score at school when he knows it’s not really his work. We even see him put his own hard-sought plans aside for a time to help out his sister, Sally.

When the Little Red-Haired Girl chooses to be Charlie’s partner on a project, he recounts all the ways he’s messed up and wonders aloud, “Was she feeling sorry for me?” In reply, his friend Linus tells him, “It might be time to consider the possibility that you’re a good person, Charlie Brown.” Indeed, the Little Red-Haired Girl tells Charlie that she doesn’t see him in a negative light at all—in spite of all his self-conscious worries. She goes on to list the ways she’s watched him be compassionate, honest, brave, funny and kind. “All the qualities I admire most,” she tells him.

Charlie says that sometimes, when he’s feeling low, he likes to look up at the stars (or God, as Peanuts artist Charles Schulz would tell us) and believe he’s getting the message, “Don’t give up, kid.” Charlie does look skyward later and asks for “a little help, for once in my life.” (He gets it.)

There are a couple of comic-book-like scenes in Snoopy’s imagination where the dastardly Red Baron swoops in to riddle the poor pooch’s doghouse with bullets. A few WWI biplanes crash. And when Lucy reads over Snoopy’s high-flying tale and calls it “dumb,” he bonks her over the head with his typewriter. Charlie himself takes a few pratfalling tumbles. Someone hits a baseball so hard, for example, that it blows off most of his clothes and leaves him sprawled out on the ground. He flies down a snowy hill on a runaway sled, gets thumped by a kite, slips on a wet floor and is pummeled by a shelf full of library books. Etcetera.

Profanity gets no more screen time than do clear-speaking grown-ups. (Which means there’s nary a foul word to be found, because “good grief!” most certainly does not count in this category.) Name-calling is restricted to “blockhead.”

Bouncy, trouble-free song snippets from Meghan Trainor and Flo Rida might leave kids wanting to explore other songs by those artists, some of which aren’t quite so clean.

This may be Charlie Brown’s fifth voyage across movie screens, but it’s truly a rare film. It’s as sweet and comforting as hot chocolate with just the right number of mini marshmallows on top. It’s as cuddly as a Christmas puppy in a red bow. It’s as cute as a kid tangled up in kite string. And it packs a keep-going-and-do-the-right-thing lesson that young and old alike can learn quite a lot from.

In fact, The Peanuts Movie is pretty much the perfect representation of some 50 years of Charles Schulz comic strips, condensed down to a single feel-good family flick. Sure, the familiar Peanuts ensemble gain a computer-generated third dimension in this next-generation romp, but they still feel as earnestly straightforward and squiggly line expressive as ever. And even the voices—engagingly piped out by actual children—ring as true to those of years gone by as you could hope for.

I’ll admit that some of my smiling reaction here may well be fueled by a splash of flying-doghouse-and-Lucy-snatching-up-that-football nostalgia. But I witnessed many a youngster sitting around me at the theater wearing the same lopsided grin I had plastered across my more mature mug. And as we followed Charlie Brown’s sighing-over-the-Little-Red-Haired-Girl calamities and Snoopy’s Red-Baron-battling exploits, we all giggled and chuckled together.

Best of all, throughout the picture’s entire 90-minute length, I didn’t hear a single mom or dad mumble a disappointed, foul-content-related “good grief!”