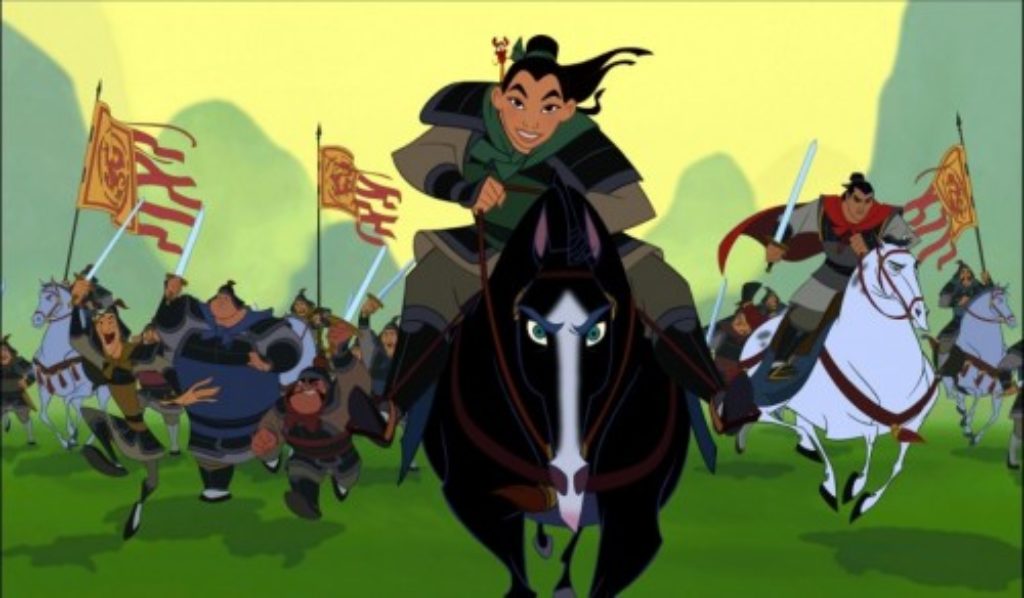 By the end of the original Mulan, our brave female warrior had saved all of China and, in the process, won the heart of newly appointed army general Shang. The two are now happily engaged and proof that opposites do in fact attract. Mulan is carefree, impulsive and strong. Shang, on the other hand, is calculating and responsible. Their obvious differences haven’t caused any problems. So far.

Enter Mushu, Mulan’s wisecracking guardian dragon. When he discovers that he’ll lose his job if Mulan marries, he plans to break the couple up using their disparities. What better opportunity to carry out his scheming than Mulan and Shang’s new assignment from the Emperor: delivering the ruler’s three daughters to a neighboring province for arranged marriages that will form a vital alliance for China. With the meddling Mushu using extreme measures to ensure his own security, the couple’s secret mission will undoubtedly put their relationship to the test.

Mulan’s father encourages the complimentary qualities of his daughter and Shang’s differences. Despite being attacked by Mongols, China’s emperor is adamant about using peaceful means to fight back. One of his daughters, Mei, likes a man for his internal qualities rather than his gruff exterior and demeanor. Her sisters follow suit by falling in love with endearing character traits instead of outward appearances.

In an intense scene, the oldest daughter ensures her sisters’ safety before looking out for her own. In fact, Mulan, Shang and their traveling companions (Yao, Ling and Chien-Po) all selflessly risk their lives to save the princesses’. In a plot twist, Mulan returns the favor in a grand gesture. After an argument, she and Shang both admit their wrongdoings and ask for forgiveness. And at least Mushu admits to being selfish in considering his own dilemma before anything else.

As in the original, Mulan II bases part of its story on ancient Chinese spirituality. The spirits of past ancestors are still prayed to, summoned and interacted with throughout this movie. One ghost carries around his own head (though this is portrayed more as funny than gruesome, scary or spiritual). Shang combines “family temples,” apparently blending these ancestors into one happy ghost family. Mulan’s father uses the yin-yang philosophy to illustrate the power behind his daughter and Shang’s union. As Mulan gives a group of children a Martial Arts 101 class, she and the group meditate.

The neighboring province treats a golden dragon like a god, seeking it out for guidance and consultation. At one point, Mushu plays this up and pretends to be a god. He assures Mulan of his commitment to her by referring to Ruth 1:16: “Whither thou goest, I will go.” He also mentions climbing a “stairway to heaven.” Ling says she dreams of a woman who “thinks I’m a god.”

None. A few couples innocently snuggle and kiss.

Though Mulan II incorporates less fighting than its predecessor, a couple of intense scenes (especially frightening for young viewers) show people getting tossed over a cliff or falling off a bridge. The traveling group gets ambushed by bandits and lots of punches and rocks are thrown in retaliation.

An ancestor ghost throws Mushu at a gong. Yao, Ling and Chien-Po get tossed out of a room by a matchmaker. In their lamenting song, the trio get in a tearoom tussle and later exchange a few punches. Shang and Ling both get singed (cartoon style) by explosions.

Kids get excited over Mulan instructing them how to “kick butt.” “Butt” and “booty” get mentioned a couple of other times. Ancestors call Mushu a “fool.”

A common theme throughout Mulan II is the balance between listening to your heart and following duty. Mulan represents the emotional pull, informing a princess that “by following my feelings, I wound up doing the right thing. I guess I learned that my duty is to my heart.” That last line is emphasized repeatedly and viewed as a motto for life. In fact, all three princesses use it as validation for opting out of their arranged marriages—and their commitment to their father.

On the opposite end of the spectrum is Shang, who represents duty, loyalty and, ultimately, restriction. When he chooses to toss the rules aside regardless of consequences, it’s obvious which side has won. Granted, there’s nothing wrong with vouching for true love or being flexible with rules when appropriate. But the message clearly projected here is to follow your inner emotions, no matter what commitments or rules you break. And despite the positive, reassuring part of that message, it’s the rash, irresponsible side that kids will prefer and latch on to.

When Mulan’s grandma says she’s heard from the ancestor spirits, she places bets on when Shang will propose to her granddaughter. Mulan’s father outwardly objects, saying that “gambling is like playing mah-jongg with blank tiles … no one really wins.” After making such a statement, however, he secretly enters his own wager (so his wife won’t see) and then goes off to pray. When he wins the bet, he justifies gambling by calling it an “investment.”

Mei plans to run away from home. She shows her underwear during a song, and a joke is made about seeing an old lady’s undergarments. Mushu repeatedly lies to Mulan and Shang to separate them, and sets Shang up to look bad in front of his fiancée.

Another Disney sequel; another straight-to-video movie that can’t touch the quality of the original. (The only aspect of Mulan II that trumps other limp sequels is its music. It does include a couple of memorable tunes. Most worth mentioning is the Sound of Music-inspired “Lesson Number One.”)

Mulan II teaches children to respect and appreciate the differences among people. Mulan is a noble leading character who epitomizes “girl power” by combining strength with femininity. Likewise, Shang is an honorable man committed to remaining loyal to his leaders. Both show signs of selflessness, forgiveness, kindness and heroism.

But this follow-up also emits some confusing (yet obvious) undertones that are sure to stick in the minds of young viewers. Feelings are placed above all else. Duty is restrictive. Breaking rules results in freedom. Gambling is OK. And Eastern mysticism serves as a backdrop.

Kids are famous for overlooking flat story lines. (It’s a skill that becomes mandatory when watching any Disney straight-to-video sequel.) So that Mulan II shortcoming won’t stop parents from plopping them down to watch these further adventures of a girl we once called “the best role model the Walt Disney Co. has offered young women in a very long time.” But those who do should make an effort to counter some of the movie’s (usually well-meaning, yet misguided) psychological and spiritual messages.